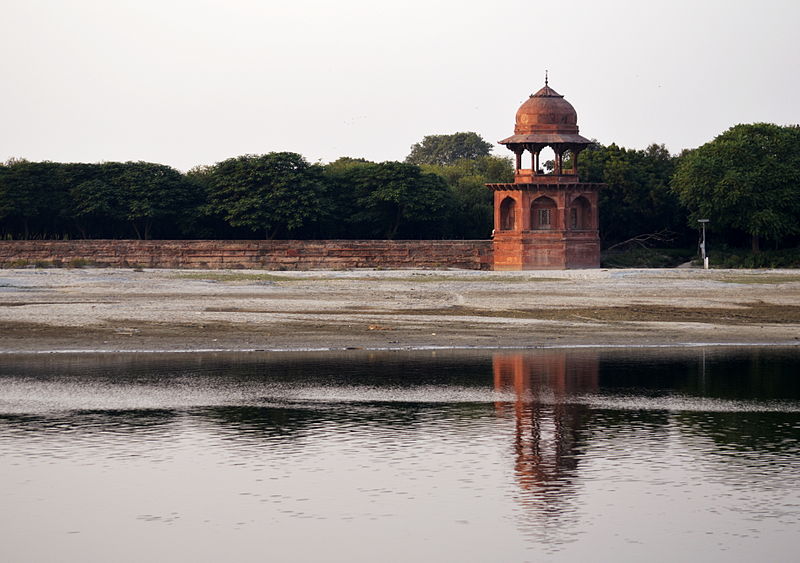 The Mehtab Bagh garden was the last of eleven Mughal-built gardens along the Yamuna opposite the Taj Mahal and the Agra Fort.[2] It is mentioned that this garden was built by Emperor Babur (d. 1530).[5] It is also noted that Emperor Shah Jahan had identified a site from the crescent-shaped, grass-covered floodplain across the Yamuna River as an ideal location for viewing the Taj Mahal. It was then created as "a moonlit pleasure garden called Mehtab Bagh." White plaster walkways, airy pavilions, pools and fountains were also created as part of the garden, with fruit trees and narcissus.[6] The garden was designed as an integral part of the Taj Mahal complex in the riverfront terrace pattern. Its width was identical to that of the rest of the Taj Mahal.[2] Legends attributed to the travelogue of the 17th century French traveler Jean Baptiste Tavernier mention Shah Jahan's wish to build a Black Taj Mahal for himself, as a twin to the Taj Mahal; however, this could not be achieved as he was imprisoned by his son Aurangzeb. This myth had been further fueled in 1871 by a British archaeologist, A. C. L. Carlleyle, who, while discovering the remnants of an old pond at the site had mistaken it for the foundation of the fabled structure.[2] Thus, Carlleyle became the first researcher to notice structural remains at the site, albeit blackened by moss and lichen.[4] Mehtab Bagh was later owned by Raja Man Singh Kacchawa of Amber, who also owned the land around the Taj Mahal.


Restoration of the Mehtab Bagh began after the ASI survey, setting new standards for Mughal garden research. This included a surface survey, historical documentation, paleobotanical assessment, archaeological excavation techniques, and requirements coordination with the Ministries of Culture, Tourism, and Planning.[12] Restoration began in the 1990s, aided by the Americans, during which barbed-wire fencing was added to the Mehtab Bagh site.[13] The garden's original ambiance was restored as ASI insisted on having plants that the Mughals had used in their gardens. Though the National Environmental Engineering Research Institute (NEERI) had suggested planting of 25 pollution-mitigating plant species every 2 metres (6 ft 7 in)[2] in the proposed renovation of the garden, this was opposed by the ASI. The Supreme Court intervened in the matter in favour of ASI who wanted the garden to only have plants that the Mughals used in their gardens.

Archaeological excavations in the Mehtab Bagh site have been described as "setting new archaeological standards for Mughal garden research", using paleobotanical and excavations techniques.[12] Excavations to the extent of 90,000 cubic metres of earth, were carried out by the Archaeological Survey of India (ASI), in 1994. The excavations unearthed a large octagonal tank with 25 fountains, and a garden, divided into four compartments. Mumtaz Mahal's tomb was found to be situated halfway between the Taj Mahal complex's main entrance and the ends of the Mehtab Bagh site.[2] This is corroborated by a letter from Aurangzeb addressed to Shah Jahan in which he referred to the condition of the garden after the flood event in 1652 AD. 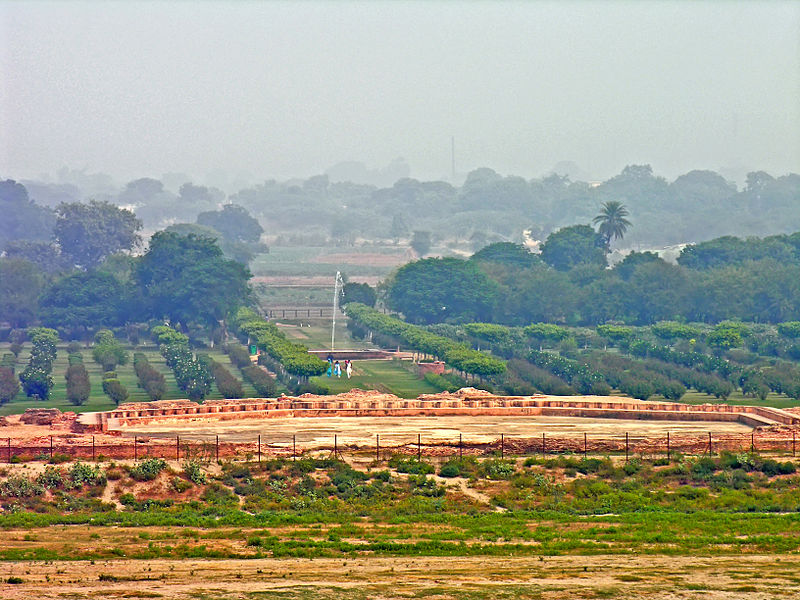